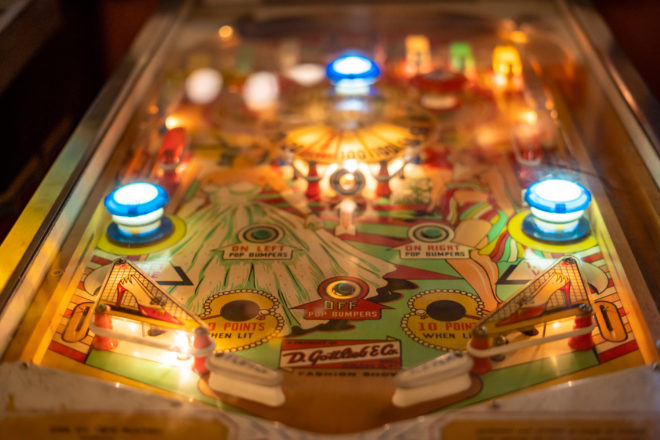 Cherry Lanes – one of the oldest bowling alleys in Wisconsin – has four lanes available on a first-come, first-served basis. The establishment also has 50-plus arcade games, from pinball to Pac-Man. Photos by Rachel Lukas.

Throughout the peninsula’s history, many businesses have come and gone. But some of the classics remain and provide throwback entertainment that’s not only a fun way to spend part of your day, but a glimpse at what makes Door County the special place that it is.

Cherry Lanes Arcade Bar, 127 N. 4th Ave. in Sturgeon Bay, wraps two throwbacks into one: bowling and arcade games. Run and revamped in 2018, the lanes are some of the oldest bowling alleys in Wisconsin. They opened in 1929.

In addition to bowling lanes and an assortment of vintage arcade games, Cherry Lanes has a kitchen and bar offering seasonal specialities, tap beer, wine and any-age-friendly mocktails and Baumeister sodas. Guests can also get brats, pizzas and a charcuterie board with Wisconsin cheese.

Dinner with a Bowl in Sister Bay

The Sister Bay Bowl, 10640 N. Bay Shore Dr., is part supper club, part bowling alley, and both parts entertainment. After tearing down and re-creating the building from a dance hall, Earl and Rita Willems opened the six-lane bowling alley in 1958.

It offers bunches of fun for a family excursion, a friends’ night out, annual events such as the King of the Bowl Tournament, the Sunday Funday bowling league plus activities throughout the year that are listed on its events calendar.

Six years after the Willemses opened the bowling alley, they launched the supper club, whose salads, dinners and nightly specials serve up the supper-club dining experience that guests remember and love.

A Hole-in-One for All-ages Fun

Besides the required maintenance and a few upgrades, they tried to keep the course as similar to the original theme – nature and animals found in the area – as they could, Opper said.

The course is filled with bushes, trees, a creek that ties into a few holes, and statues of a bear, wolf, deer and badger – the last being the only one that isn’t an original. The bear and badger are also some of the most popular holes with players.

The favorite, though, is the windmill, Opper said. It’s a multilevel hole with three slots. One leads to the end, and the other two sends golfers on a side quest through some pipes.

The course feels whimsical with its fun-house mirror, gnomes everywhere on the course, a corral filled with half a dozen rocking horses and even the old woman who lives in a shoe. But it’s not childish. During a span of fewer than 15 minutes during my visit, both a family of four and a group of teenagers started playing. When it comes to mini golf, Opper said, it really is fun for all ages.

“Anyone can play it, and it’s easygoing,” she said, “unless, of course, you’re one of those people who takes it seriously.”

Those people were the source of the course’s motto, “Where the pros play,” which came from people bragging about their scores. That group was also the inspiration for the Red Putter Pro Tournament, which will celebrate its 20 anniversary this year.

Modern Movies with a Side of Nostalgia

About 10 minutes south is the Skyway Drive-in Theatre, 3475 Hwy 42 in Fish Creek, where brothers Dale and Jeffery Jacobson run the 72-year-old outdoor movie theater. They took over for their parents, who purchased it from one of the original owners. After growing up there, Dale said they decided to take it over once their parents felt it was time to move on.

The Skyway is the longest continuously running drive-in in Wisconsin and one of only nine left in the state. The theater features a two-for-one double feature each night that it’s open. Though they’re conscious of how much movies cost, Jacobson said they aim to show films throughout the summer that are family friendly.

At the snack bar, they’ve worked to keep serving the same classic snacks as when the theater opened in 1950: popcorn with real butter, classic drinks and ice cream, pizza, hot dogs and more. They even still sell Pic, the mosquito-repellent coils.

“We always wanted to keep it the same,” Jacobson said.

He said he thinks the drive-in perseveres because of the nostalgia linked to it. Just like Red Putter, people share it with their kids and grandkids because they went there when they were younger.

“And,” he said, “it’s a great way to be outside at night under the stars.”

Finish the Day with a Flashback Treat

Nothing caps a day of throwback fun like old-fashioned ice cream. If you’re up for a bit of sightseeing and traveling, catch a ferry to Washington Island, home of the Albatross, 777 Main Road. The drive-in restaurant features sandwiches, burgers and a packed ice cream menu. It also opened the Alby’s Nest tiki bar a few years ago.

If you think you’re getting fast food here, think again. The establishment is very open about its less-than-speedy service, even posting a sign on the order window to that effect. Part of it reads: “For fast, go to Chicago. North of the Tension Line you are. So relax, take time to smell the flowers, and give us time to prepare your order with T.L.C. (Tender Loving Care).”

The entire dining area is outdoors, so guests can enjoy one of the 60 ice cream flavors while out in the sun.

Back on the mainland, any self-respecting fanatic of vintage fun would be remiss to miss Wilson’s Restaurant & Ice Cream Parlor, 9990 Water St. (Hwy 42) in Ephraim. The 116-year-old Door County landmark, recognized by its signature red-striped awning, has more than 30 ice cream specials – a true cherry on the top of a fun-filled, retro day.