In this issue of Sustainability we look at the future of farming the peninsula, but first let’s take a quick look at where we’ve been and where we are going.

In 1915 – a mere century ago – there were 25.5 million horses and mules on American farms and some 39 million acres were devoted to oats to feed them.

Twenty years later, in 1945, the industrial revolution had finally taken over in agriculture. That is the year tractor power exceeded equine power. Not that the number of tractors and horses was equal. It is generally recognized that a tractor can do the work of five draft animals.

As an example he mentions the stone picking that always was required after using a traditional plow on a field. The shape of the plow brought stones to the surface that had to be removed.

Halstead noted that another farmer was using a German-made plowing disc that did not bring stones up.

“Sometimes you steal ideas from other farmers,” Halstead said.

He bought a similar German plowing disc four years ago. 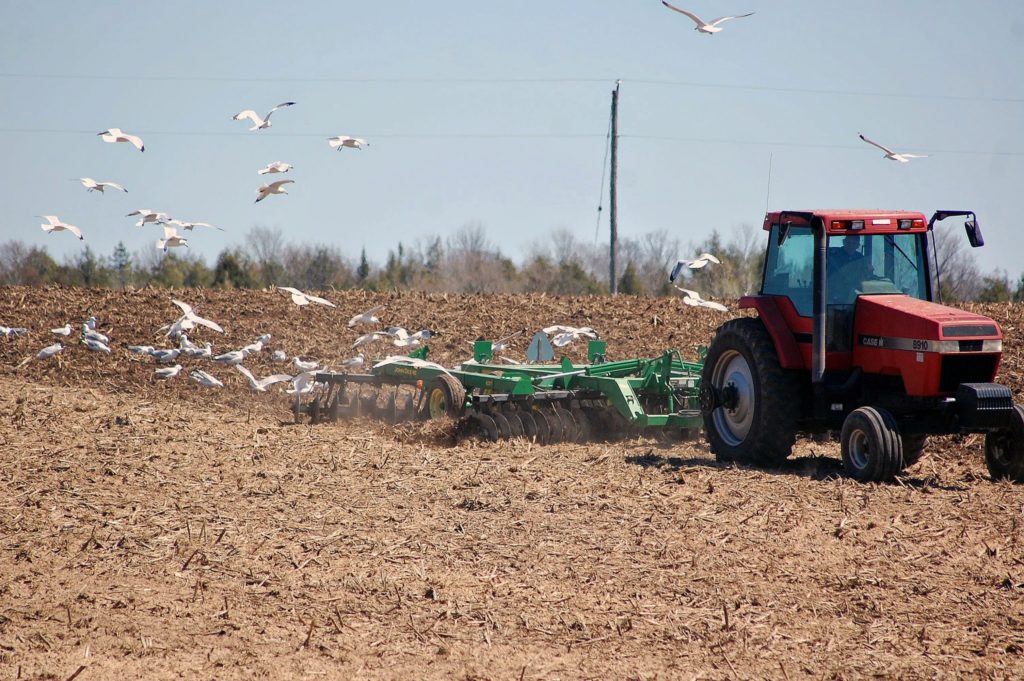 “The way it’s set up with the pitch and the angle and the speed you go, it does a really nice job of preparing the seed bed,” he said. “You’ve got to be open to new ideas. You can’t live in the past.”

Smart farming is essential as the world continues to grow and the world’s arable land decreases. The Food and Agriculture Organization of the United Nations predicts that 9.6 billion people will need to be fed daily by 2050, which means food production must increase by 70 percent.

Precision agriculture is considered the third wave of modern agricultural movements – the first being the mechanization of the early 20th century, when a single farmer produced food for approximately 26 people. The second wave is identified as the green revolution of the 1990s, with each farmer feeding approximately 155 people.

With this third wave of precision or smart farming, each farmer will be expected to feed 265 people on the same acreage as his predecessors.

Some have suggested that good soil should be put on an endangered list. One of the key research areas for the future of farming may be understanding the microbes in the dirt. Ninety percent of the world’s organisms live underground, many of which contribute to soil health. No-till farming and planting of cover crops are gaining wider currency among farmers as ways to improve soil health.

Researchers such as Professor Sharon Doty in the School of Environmental and Forest Sciences at the University of Washington has been investigating possible green solutions to environmental problems through plant-microbe partnerships. The idea is to improve plant growth with less water and chemicals, while removing environmental pollutants.

Doty has been studying the effect of endophytes of poplar and willow, trees that grow in low-nutrient, hostile environments. Endophytes are microbes (fungi and bacteria) that exist in living plant cells.

So what does this mean for the future of farming? What it comes down to is that our current understanding of nature is based on what we know to date, and there are important discoveries to be made.