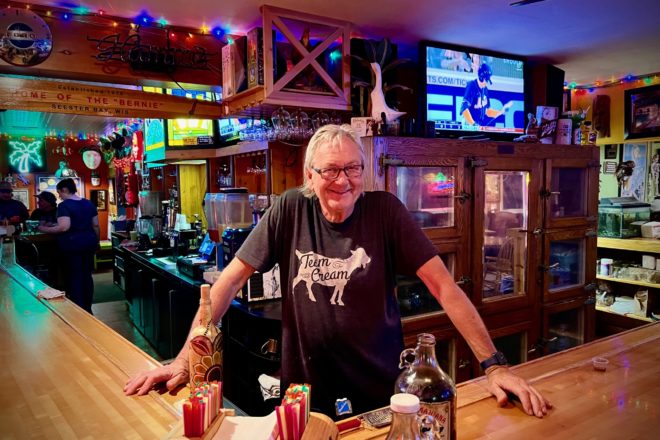 James “JJ” Johnson stops during a final spin behind the bar pouring Bernies and Mamajuana. Photo by Myles dannhausen Jr.

The cohorts were there one last time – Bruce, David and Jeanne, Rhonda, Dave and Timmer.

There was the next generation of restaurateurs inspired by the JJ’s dream filtering in as well. Chad, Travis, Randy, James, Mike, Paula.

And there were those of us who just grew up with JJ’s, who only know a world with JJ stumbling out from that kitchen. J-Mitch behind the bar. Jeff. Andy. LA. Me.

All there for a final Bernie, margarita or just a last look around before the reins to one of Door County’s landmark restaurants changes hands.

JJ and Kristine bought the shack in 1978, a few months before I was born. I am not important to their story, but JJ’s is to mine, so I include that fact which dates me, but more importantly, dates JJ.

For nearly 45 years, he has roamed the narrow straits among these tables, bumped the speed behind this bar, flipped burgers with Timmer on this line.

“He is the star of the show,” Kris says. “I just keep it running.” In some ways – certainly not all – they are Sister Bay’s answer to Elaine and the late Bob MacDonald of the Bayside in Fish Creek. Bob was the face; Elaine was and is the glue.

“I’m ready,” Kris says, acknowledging how hard it is as she takes a look around at friends, friends’ kids, and friends’ kids’ kids in the bar. “It will still be here, but we’ll have to stay away for a while.”

They’ve talked about selling for years, but only during the last year or so, she says, did JJ take it seriously.

Tonight JJ is still working the crowd, his customary black compression socks pulled to his knees beneath his shorts and gray Team Cream T-shirt. His shaggy blond locks are at mid-length now, not quite surfer dude. He trades jabs, meets babies, nods knowingly to those for whom this is a sad night, the end of an era.

JJ and Kris raised four children while running this place. All of them were part of it – cooking, waiting tables, lending their names to burgers on the menu. Jesse, now a cheesemaker and the erstwhile goat wrangler behind Door County Creamery down the road. Kendall, one of the area’s foremost wine experts, who runs the bar next door at The Waterfront. Kaija, an elementary school teacher who still fills serving shifts on weekends and during the summer. And Kelsey, a nurse in Milwaukee.

Not a bad tally.

Kendall, who moved back home several years ago to run the bar at The Waterfront, called the sale bittersweet.

There aren’t great retirement plans for independent restaurateurs. You work, you pay the bills, you work, you hope you have some extra after you pay the bills. Then, if you’re lucky, you stay in business, and one day you’re old, and you have to figure out how to get out, or pass it on without leaving your kids with crushing debt. Or you time it all wrong, like so many during the crash of 2008, and you have to sell at the bottom.

Now JJ and Kris, in their 70s, can sell in good times.

“But what about a place that just is someone?” Kendall asks. “And they have to let it go.”

JJ’s is, well, JJ. He came here from Milwaukee as a teacher and artist, but it’s not just that he made the backlit stained glass behind the bar and the stained glass hanging over the tables and on the front door. It’s not just the mannequins he randomly bought that became a staple at his bar. Or the screws he turned on vendors to get the best deal and the fact that he can tell you the going price of everything at the Pig. It’s his jerky saunter, his tinkering, his rummaging. JJ is a vibe.

The sign still hangs as Unkefer and his Wild Tomato crew take the reins, and it will be much the same for now. But it won’t be – can’t be – the same.

JJ and Kris aren’t going far. They live around the corner. Their attention now turns a few feet south to The Waterfront, which they still own. And JJ continues to putter around at his Egg Harbor popcorn and gelato place, Jimmy’s, which he has hoped to open for several years.

Speaking of popcorn. Late nights at the bar, JJ disappears from the bar to go wherever it is that JJ goes, only to reappear with a bag of his homemade popcorn, passing it around for judgment. It happens tonight, of course, but it’s not much of a taste test when you’re several shots of Bernies and mamajuana deep (if you don’t know, you’re doing fine).

I live across the street from what is known to a certain generation as JJ’s Farmhouse, and to another as JJ’s Goat Farm (the goats were sold last winter). A couple years ago, I asked JJ a question, the answer to which illustrates just how seriously the man takes his popcorn. JJ grows corn on that property, and I asked him how the crop was doing over at the goat farm.

He leaned closer and looked me in the eye. “Those goats are on my popcorn farm.”

I didn’t press for the answer to my question.

Anyway, back to Tuesday. The bell was rung, and rung with more heart and more gusto than ever. Too many times, maybe. As the night goes on, and the bell rings again, the sombreros come down for pictures. Tears are shed on the curb out front.

JJ saunters around until he slinks out and just a few souls remain at the bar. I think about slipping into my mid-40s. About this family being in this place for every one of those years. About the changing hands at The Viking Grill, The Alpine, The Cookery, Fred & Fuzzy’s. About change, period.