On many winter nights, the bartenders are their own crowd for most of a shift. Photo by Paula Hedeen.

“You don’t get fired from or quit the Bayside; your shifts just get further apart,” said a bartender in the midst of a long break in the 1980s.

In a way, that simple phrase encapsulates so much of what makes the Bayside Tavern such a staple of Fish Creek. It refers to a phenomenon common to Door County restaurants, where getting fired or quitting never has the ring of finality that it does in other professions, or other towns. Often, it doesn’t last through the end of a day, or even a shift.

People’s mistakes are forgiven, feelings mend, and sometimes out of mutual necessity, a bartender who left dramatically will find herself slinging drinks to thirsty patrons again when a holiday rolls around, the bar is short-staffed, and she’s short on cash. In a small town, you can’t be too picky about your staff and the same goes for your customers. 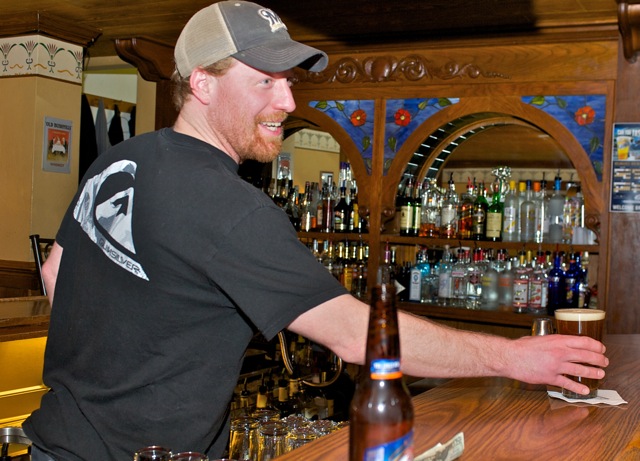 Brandon Fabry has bartended at Husby’s and the Bayside, learning the subtle (and not so subtle) differences between the crowds. Photo by Paula Hedeen.

The Bayside welcomes them all – the yachties and the tradesmen, the esteemed of Cottage Row and the hippies of Camp David, the pastel boat shoes and the muddied work boots. Young, bronzed 21-year-olds in the awe of their first nights of Door County’s summer bar scene, and old gray-beards not impressed by the this crop of newbies or the 35 incarnations that came before them.

Here they sit elbow to elbow, the ledge of the bar the great equalizer in a town where it’s the only one that waits for them all winter long.

Some have been kicked out “for life” before, but have eased their way back in. Many have quirks, some endearing, some unnerving, all accepted by a cast of barkeeps that have changed in name, if not in ethic, through the years. Digger. Billy. Christie. Smilin’. Richie. Scottie. DJ. Stoner. Brandon. Leif. Stevie. Bill.

On many winter nights, the bartenders are their own crowd for most of a shift. Photo by Paula Hedeen.

“We get all the people before the town meetings, after the meetings,” said Brandon Fabry, a veteran in his 13th Bayside season. “If something happened in town, they come down and ask us what’s going on. When we have thunderstorms and the power goes out, we stay open for the town.”

“As a local, in the winter, you know you’re going to run into somebody to hang out with,” longtime bartender Kathy Faulds said. “It’s sort of the lowest common denominator. The $8 an hour guy can end up in conversation with the millionaire walking off his yacht.”

But come high season, many locals make themselves scarce.

“They avoid the crowds, and you won’t see them for the summer,” Faulds said. “They’ll walk by, peek in the window, see all the people and keep going. They like it when they have your full attention.” 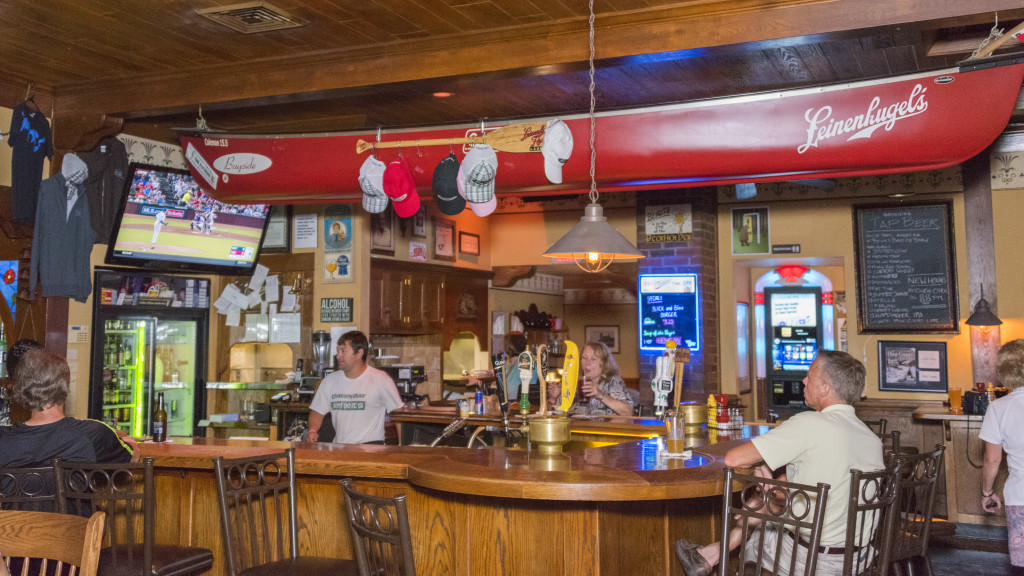 The Bayside Tavern is as close to Cheers as you’ll find in Door County. Photo by Len Villano.

While there are many bars on the peninsula in which everyone will know your name, it’s the Bayside that feels most like Cheers, the bar from the 1980s television show of the same name. Dark, no matter how blue the sky; warm, no matter how cold outside. The Bayside is a living room, the stools made for comfort.

“Husby’s is more of a sports bar, the Bayside has always been more of a sit-down-and-drink kind of a bar,” said Fabry, who served a healthy stint at Husby’s before joining the Bayside crew. He doesn’t mean that to imply it’s a bar full of drunkards – it’s actually a pretty casual scene nowadays, more vacation drinkers and eaters than anything else – but rather, that if sitting down and drinking is your thing, the Bayside is a pretty good place to do it.

For 40 years, the MacDonald clan has kept the place humming. Elaine and Bob MacDonald brought their family here in 1975, taking over what was once Bill’s Bar, making incremental changes through the years that would get little notice in many worlds, but which are a big deal to the regulars of a bar. 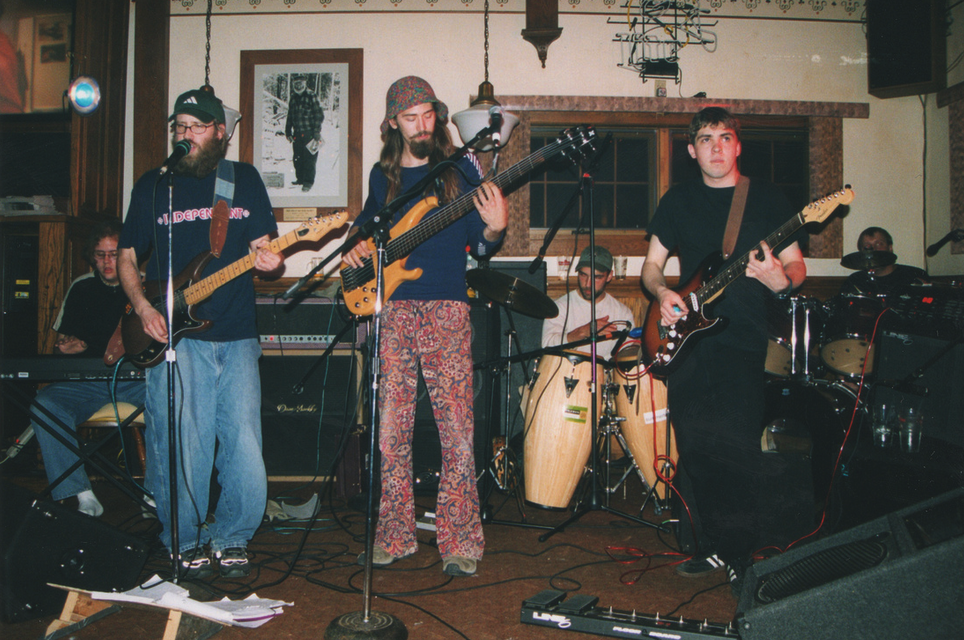 Little Marsh Overflow is one of several Door County bands that got their start playing the Bayside Tavern, where the gaze Koonie Fish never strays. Photo by Dan Eggert.

A quarter increase in the price of a Bud Light might send tempers flaring, or the removal of the pool table, or the color of the paint on a wall. Koonie Fish stays the same, however, a watchful eye over an evolving scene. The Bayside would make a fascinating case study in a business school. For years at a time it has functioned with a nominal manager, or none at all. Yes, Elaine is always around, watching over everything and making the final call, but the bartenders make the schedule and make the place hum day after day.

“Elaine and Bob set the rules,” Fabry said, “but to an extent the place just kind of runs. Over the years, employees have taught each other how to do it. It helps that we pretty much maintain the same schedule for everybody, to the point that for a while we didn’t even write a schedule.”

Faulds said there has always been a method to the madness.

“Basically, whoever the longest-tenured bartender on duty was functioned as the manager,” she said. “I always looked at it like I’m a subcontractor for the place. Whoever was closing the joint down was responsible for whatever happened. They’re the ones getting the call in the morning if the work’s not done.” 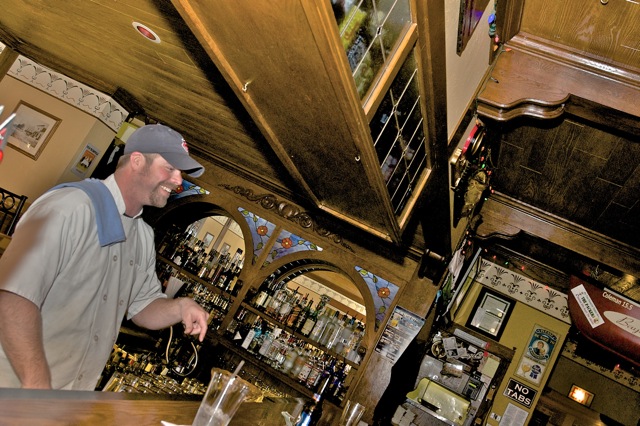 The Bayside Tavern has been a Fish Creek institution for 40 years. Photo by Paula Hedeen.

From the late ‘80s and through the ‘90s, the Bayside’s calling card was live music. Bands on Saturday nights packed the place to the point that people went next door to the C&C Club just to get some air. On Mondays, bands from Milwaukee, Madison, or local favorites Big Mouth would pack it as well, but with a completely different crowd. Monday was the “industry” Saturday night, when all the cooks and servers from Northern Door took over the bar, emptying wells and filling tip jars.

And then there was The Groove King, who cooked during the day, sipped Jim Beam in the evening, and ruled his keyboard at night for open mics or shows of his own.

But the live music game is boom or bust in a bar, often more bust than patrons realize, and over the years Elaine tired of that racket. Too many headaches, too little payoff, too much drama. The crowds are different today, too. The C&C is gone, and with it the two-bar draw that kept people partying in Fish Creek all night long. Also gone are the hoards of college students and local kids returning to work the summers, many replaced by workers from abroad who are much smarter about saving the money they make working doubles and triples all summer long. 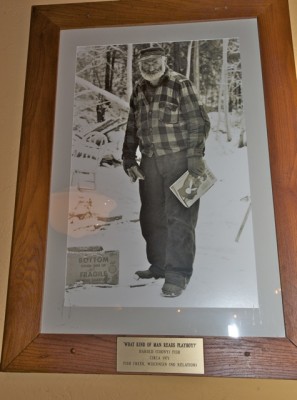 Koonie Fish doesn’t miss much at the Bayside Tavern. Photo by Paula Hedeen.

“The kids used to work all day, then come into the Bayside and spend everything they made,” Faulds said. “We would have to throw a huge crowd out of here at closing time on a Saturday, and even on weeknights.”

“People are just more conscious of how stupid drunk driving is,” Fabry said. “Everyone knows someone who has a DUI. We rarely have to kick a ton of people out at 2 am, and those we do are usually walking.”

“A lot of people, when they come up on vacation or for the weekend, they’ll stop here before they even go to their house or motel,” Fabry said.

And come winter, the locals return, their stools now given room to breathe. Like many businesses, the Bayside operates at a loss on many winter days, and the income of the servers dwindles to half or less of the peak summer shifts. But Elaine keeps it open in part as a service to the community, providing a place to go, a warm stool, a living room.

“You learn in Door County, you gotta go through a recession every year,” Faulds said. “But the beautiful thing about Door County and the Bayside is, you know the people are coming back every summer.”

And the people know the Bayside will be there, too. Maybe a little different, maybe with a new face behind the bar, but the door will be open, Koonie Fish will watch from the wall, and somewhere inside, a familiar face will say hello.